The Origin of Life

A.  The Start of Life

This book began with the notion that understandings derived from the study of simple molecules can be applied to complex biological macromolecules and systems.  We developed an understanding of the structural, thermodynamic, and kinetic properties of the "simplest" biomolecules, including single chain amphiphiles like fatty acids, and double chain ones like phospholipids, and how these properties could explain the propensity of these molecules to form complex lipid aggregates (micelles and bilayers).  We extended these ideas to the process of protein folding and the assembly of biological complexity.  Is there something intrinsic to the property of molecules such that their localization together in the right microenvironment could lead to a "living cell"?  How did life originate?  That is the topic of this last capstone chapter.

Defining life is actually quite difficult.  Here is a list of requirements that seem reasonable, but other have noted that this list would exclude the mule.  Life can self-replicate, self-sustain, evolve, respond to environmental changes, and die.   The earliest known fossils (stromatolites from cyanobacteria) are approximately 3.5 billion years old. 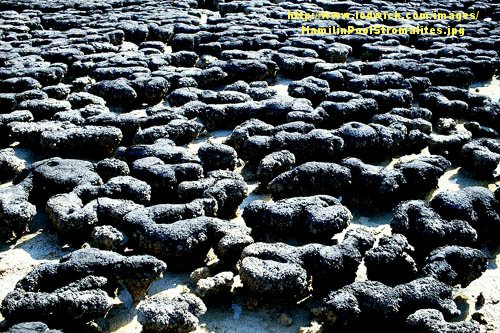 We have just finished studying the complex interactions involved in cell signaling.  How could they have evolved?  Consider the central dogma of biology.  In the present biological world,  proteins (DNA polymerase, RNA polymerase, transcription factors) are necessary for DNA synthesis, replication and gene transcription.  But you need DNA to encode the proteins.  This "chicken vs egg" dilemma has been addressed when it was realized that RNA can both carry genetic information as well as enzymatic activity (even at the level of the ribosome used for protein synthesis).

B.  Abiotic Synthesis of Amino Acids and Peptides

Much work has been done to determine if the building blocks for present biological molecules could have been synthesized early in Earth's history.  Amino acids and fatty acids have been found in meteors suggesting the possibility.  Earth's early atmosphere would have had little oxygen, so most components should have been reduced.  It probably consisted of methane, ammonia, hydrogen and water similar to the atmospheres of other planets in our solar system.  The composition of the early atmosphere is still contentious.   In 1953 (the same year that Watson and Crick published the structure of double-stranded DNA), Stanley Miller showed that electric discharges (to simulate lightening) in a reducing atmosphere over a "simulated sea" produced many amino acids.  Up to 11 different amino acids have been produced in this fashion along with purines and pyrimidines (these required concentrated reaction mixtures) necessary for nucleic acids.  Adenine can be produced just through the reaction of hydrogen cyanide and ammonia in an aqueous solution.  Other nucleic acid bases can be made with hydrogen cyanide,  cyanogen (C2N2) and cyanoacetylene (HC3N).

No complex polymers arise through these reactions.  However, in 2004, Lehman, Orgel and Ghadiri were able to show that in the presence of carbon disulfide, a gas discharged from volcanoes, homo- and hetero-peptides were produced.  Amphiphilic peptides can even catalyze their own formation from peptide fragments, if the fragments are activated.  The fragments would bind to the larger "template" peptide through nonpolar actions of the side chains which are oriented along one face of the helical axes.  If the fragments bind in a fashion in which the electrophilic end is adjacent to the nucleophilic end of the other peptide fragment, condensation of the two peptide fragments results.  The larger template peptide acts as a template (effectively as an "enzyme") in orienting the two fragments for chemical reaction and effectively increasing their local concentration.  The reaction of the bound fragments is essentially intramolecular.   The reaction even proceeds with amplification of homochirality.

Could the prebiotic amino acids have polymerized into a protein that could fold in a fashion similar to modern proteins?  That question has recently been addressed by Longo et al (2013).  They asked the question whether the amino acids found in Miller-type prebiotic synthesis mixture and in comets/meteors (Ala, Asp, Glu, Gly, Ile, Leu, Pro, Ser, Thr and Val), a restricted set (10) compared to the present 20 naturally-occurring amino acid, could form a polymer that could fold.  Notice that this reduced ensemble of amino acids lacks aromatic and basic amino acids.  These proteins would be acidic with a low pI and may have trouble, given the lack of nonpolar aromatic amino acids, in forming a buried hydrophobic core which stabilize proteins.  Nevertheless Longo et al were able to synthesize a protein with a slightly expanded set of amino acids (12, including Asn and Gln, with 70% prebiotic amino acids).  The structure of one of the proteins, PV2, is shown below.  The protein was more stable in 2 M NaCl (compared to 0.1 M) in which it showed a cooperative thermal denaturation with a melting point near 650C using differential scanning calorimetry.   The protein had properties similar to those from halophilic organisms that thrive in high salt.  These properties include low pIs and high negative charge density, which allows cation-protein interactions in the high salt environment, and lower stability in low salt environments.   Earlier oceans were saltier. Halophiles are an example of extremeophiles which are highly represented in archea.  Although most halophiles are aerobic, some are anerobic.  Perhaps life arose in high salt environments. 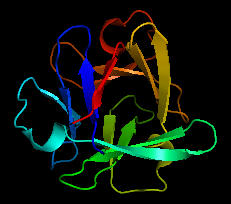 Sugars are required for present energy production but also as a part of the backbone (ribose, deoxyribose) of present genetic material.  Many sugars can be synthesized in prebiotic conditions, using carbon based molecules with oxygen, such as glycoaldehyde and formaldehyde (both found in interstellar gases), as shown in the figure below.  Glycoaldehyde was recently found in star forming regions of the Milky Way where planets are likely to form.   The presence of borate, which stabilizes vicinal OHs on sugars,  is required for the production of sugars instead of tars.

RNA molecules containing sugars such as threose, aldopentopyraonses and hexopyranose can also form stable  secondary structures like helices.  (Remember, RNA probably preceded DNA as the genetic carrier of information  given that is also has enzymatic activity). Is there something special about ribose that made it selected over other sugars for nucleic acids, especially since it is found in low abundancy in the products in synthesis reactions conducted under prebiotic conditions?  One probable reason is it unusually high (compared to other sugars) permeability coefficient through vesicles made of phospholipids or single chain fatty acids, as shown below.

In general, the greater the number of carbon atoms, the smaller the permeability.  However, the table above clearly shows large differences  in permeability for sugar isomers with the same number of C atoms, and the difference is not affected by the lipid composition.  Ribose has markedly elevated permeability compared to other 5C sugars (as do erythritol and threitol among 4 C sugar alcohols).  What is so unique about ribose? 20% of the sugar is in the furanose form.  Rate constants for ring opening of furanoses are elevated, suggesting greater flexibility.  The α-furanose anomer is amphiphilic in that one face is hydrophobic and the other hydrophilic.  All of these may promote ribose permeability.

A major problem that has plagued prebiotic researchers is how the product of the carbon-oxygen compound (sugar) links to the product of the carbon-nitrogen compound (nucleobase) to form the nucleoside.  Recent research by Powner et al has offered an innovative solution.  Instead of forming the sugar and base in separate reaction, and then linking them covalently, the combined molecule could be synthesized in a single set of linked reactions.  Inorganic phosphate serves as both a general acid/base catalyst  (HA/A- in the figure below) in these new reactions in the formation of an important intermediate, 2-amino-oxazole, and as a nucleophilic catalyst.

Glyceraldehyde, 2-amino-oxazole, and inorganic phosphate can react to form a ribocytidine phosphate.  Possible reaction mechanisms are shown below.

Figure:   Abiotic synthesis  of a ribocytidine phosphate without condensation of a preformed ribose and cytosine

Abiological synthesis of polymer precursors is a long way from creating genetic polymers like RNA and DNA.  These genetic polymers have one property that at first glance seems not conducive to a genetic molecule.  Both are polyanions, which must be packed into a cell and folded onto itself to form the classic dsDNA helix and many different RNA structures.  This problem is solved to some degree by the presence of counterions that help mask the charge on the negative backbone of the nucleic acids. The presence of phosphate in the phospodiester backbone linkage does confer an important advantage over other possible links (carboxylic acid esters, amides and anhydrides).  The electrophilic phosphorous atom is hindered from nucleophilic attack by the negative O attached to the phosphorous.  Also, the phosphorous is sp3 hybridized compared to the sp2 hybridization of the electrophilic carbon atom in anhydrides, esters, and amides, and hence is less accessible to nucleophilic attack.  Most people now believe that RNA, which can act both as an enzyme and genetic template, preceded DNA as the genetic carrier.  The evolution of DNA as the primary genetic carrier required an enzyme to convert ribose to deoxyribose.  This would make the nucleic acid less likely to cleave at the phosphodiester bond with the replacement of a nucleophilic 2' OH with an H, and make the genetic molecule more stable.   Other types of genetic carriers might have preceded the RNA world, especially if the monomer required could be more readily synthesized from abiological sources.  One such alternative are threose nucleic acids (TNA).  Synthetics ssTNA can base pair with either RNA, DNA, or itself to form duplexes.